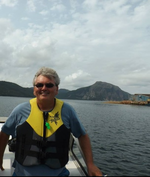 It is with great sadness that the families of the late Alphonsus Farrell of Grand Falls-Windsor, NL announce his passing Saturday, September 26, 2015 at St. Jacques Island, Fortune Bay, NL.

When Phonse decided to become a teacher, it didn’t come as a big surprise, given the fact that his grandfather, Thomas Farrell, was a teacher for 49 years in the community of Bay Du Nord. Teacher Tom as he was known, was also a community leader, preacher, philosopher, mediator and scribe to many generations of folks who lived in the community at those whom attended school. His influence has lived on in the success of those who had the privilege of being in his classroom.

Phonse’s belief in the inherent value and the acknowledged potential of each child regardless of academic background or ability was reminiscent his grandfather’s philosophy. This philosophy was a belief that, in a community you have many people with different strengths and needs, but in the end, everyone was valued and brought a gift to the table.