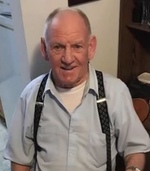 It is with great sadness that the family of Eric Frank Horwood announce his passing on April 9, 2021, at the age of 87.

A native of Morton’s Harbor, Eric was known for his love of woodworking, hobby farming, cod fishing and having a beer with his friends. He was the first taxi on New World Island and he was a master at boat building, becoming a perfectionist in his later years. Many knew him as the Squid Man from various places throughout Central Newfoundland, but he was best known for Horwood’s Store, on Finn Avenue, which he and his wife Shirley owned and ran for over 10 years.

He was preceded in death by his wife of 64 years, Shirley Marie Horwood.

A service in memory of Eric will be held on Sunday, April 11, at 2:00pm, at Central Funeral Home on Union Street in Grand Falls Windsor. Pallbearers are his son, Derek, Sean Fudge, Yvan Normandeau, Roger Martin, Jim Burden, and Monty English. Funeral arrangements were entrusted to Jim Maidment of Central Funeral Homes.