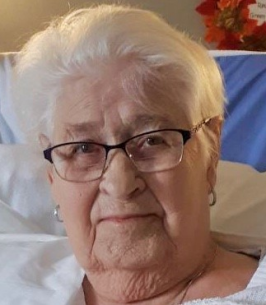 Passed peacefully away at The Carmelite House, Grand Falls-Windsor on April 5, 2022, Esther Marie Walsh (Courtney) at the age of 94.

Esther was born on August 31st, 1927 to Sylvester and Hannah Courtney in Bellevue, Trinity Bay, Newfoundland. After her beloved mother’s passing, together with her siblings and father, at the age of 10, Esther moved to Windsor, Newfoundland. As a young woman, she worked at Cabot Bakery where she met Austin, whom she later married; together they enjoyed 74 years of marriage, raising 14 children.

Throughout her life, Esther enjoyed crocheting and knitting, sending countless pairs or wool socks to her children and grandchildren who lived throughout the country. She loved the outdoors and spent many a fall day berry-picking alongside her husband, children or grandchildren. Esther enjoyed spending time at her cabin in Fortune Harbour, where she relished playing cards with family and friends. At the cabin or at home, the kettle was always on, tea buns were well-stocked, the smell of fresh bread wafted through the air, the door was always open and all were welcomed.

Esther enjoyed being involved in the community and spent many years as a member of St. Joseph’s Women’s Auxiliary and The Rebekahs. For much of her adult life she was a dedicated member of The Order of the Royal Purple and at the time of her death she continued to hold membership with The Benevolent and Protective Order of Elks, Lodge 55.

Esther’s family wish to thank the staff of Carmelite House for their care and compassion during her time there.

In keeping with Esther's wishes, together with her late husband Austin, a joint funeral and internment will take place at the Cathedral of the Immaculate Conception on Friday, September 30, 2022 at 11:00 a.m.

Donations in her memory can be made to the Newfoundland and Labrador Heart & Stroke Foundation.

Funeral arrangements have been entrusted to the care of Ryan Peddle of Central Funeral Home, Grand Falls-Windsor.