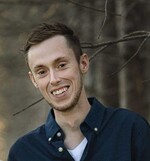 It is with great sadness that the family of the late Roderick Christopher Paul Payne announce his passing next to his wife, Megan Payne, after a 14 year long and courageous battle with cancer, at the Central Newfoundland Regional Health Care Centre in Grand Falls-Windsor on June 9, 2022, at the young age of 35 years.

There’s something so incredibly wrong about watching someone die of cancer. It touches every corner of your life. And as his wife, that means I had cancer too. We were both fighting against this beast. I met and fell in love with Roderick at 20 years old and since then, all I knew how to do was fight for my husband. I spent all my time researching how to heal him, not about the prognosis of a stage IV cancer diagnosis. I wasn’t letting a stage become a death sentence. I juiced every fruit and vegetable under the sun, he took handfuls of supplements, he ate grass-fed beef, tried detoxes, herbalist medicine, had every surgery, radiation, chemotherapy and immunotherapy that was offered/given.

Every day we got up ready to fight. There was no giving up for Roderick. He sat through grueling hours of chemo being pumped through his veins and radiation poisoning his body, and then got up the next day to go to work. Through the night, I was on watch ready to empty another trashcan because he got sick in it, to calm coughing fits or to wake up in a panic and reach over to put my hand on his chest to make sure he was still breathing. And through it all, all he could say was, “I wouldn’t be here if it wasn’t for you, Megan.”

Death was not in his vocabulary, although that’s what was happening to him, but he chose life and living for him meant every second he could take another breath.

He was a warrior. He was a fighter. He was the strongest person you would, if you had the chance, to meet. He was a great force to be reckoned with. The weaker he got as he dwindled down to skin on a frame of bones, the stronger I saw him get. He was no longer fighting with weapons of trying to cure this or heal this, but he was fighting back with peace. Not letting a ravenous monster steal your peace is the bravest thing anyone can do. And to his last breath, that’s what I saw, absolute peace.

When he died, to the crowds in his arena, it looked like the battle was over. It looked like he lost. But what they didn’t see was that he only finished his part of the race. He passed the baton to me. He paved the way for my own fight in this life, the constant fight for peace in a chaotic world. He gave me love, he gave me courage and he gave everything I was supposed to know so I wouldn’t have to do this alone.

If he was being interviewed on a news program and someone asked him, “Rod, how does it feel to lose to cancer?” He’d smile back and say, “I have no idea what you’re talking about.”

No funeral will be held at this time. There will be a celebration of Roderick’s life at a later date this summer.

His wife, Megan Payne, would like to personally thank Dr. Wendy House, Dr. Amy King, Dr. Richard Lush and Dr. Erin Powell along with the nursing staff at the Cancer Clinic at the Central Newfoundland Regional Health Centre for the outpouring of care, love and support given to Roderick the past 14 years. It will never be forgotten.